The Vaishnava Seva Society invites you to visit the Sri Chaitanya Saraswat Seva Ashram in Santa Cruz (Soquel) and San Jose, California. We are a community of bhakti-yoga practitioners founded by Srila B.S. Govinda Maharaj and directed by Srila B.P. Janardan Maharaj. Bhakti-yoga is the spiritual path of divine love and devotion taught in the revealed scriptures Srimad Bhagavad-Gita, Srimad Bhagavatam and Sri Chaitanya Charitamrita.

According to transcendental literature, the spiritual culture best suited to our modern age is the devotional practice of hari-nama-sankirtan. Hari-nama-sankirtan is the congregational chanting of the Holy Names of the Supreme Lord Krishna. It is the primary limb of the nine-fold process of bhakti-yoga. The nine limbs are: hearing, chanting, remembering, serving, worshiping, praying, assisting, befriending, and completely surrendering to the Supreme Lord Sri Krishna.

Sri Krishna Chaitanya Mahaprabhu was an incarnation of the Supreme Lord Krishna who demonstrated the proper behavior and mood of a devotee (a bhakti-yogi). He spectacularly propagated the chanting of the Holy Name throughout medieval India and revealed the spiritual path of ecstatic love of Godhead. He inspired a venerable lineage of pure devotional yogis called the Rupanuga Sampradaya. They have preserved and elegantly systematized his teachings for the amelioration of all souls worldwide. The Rupanuga Sampradaya is represented by the modern day saint Om Visnupad Srila Bhakti Sundar Govinda Dev-Goswami Maharaj, his successor Srila Bhakti Nirmal Acharya Maharaj, and others of his stalwart sannyasi disciples including our local leader, His Grace Srila Bhakti Pavan Janardan Maharaj.

Srila Govinda Maharaj’s sermons have been translated into twenty-five languages and published in 250 books. On twenty-three world tours he personally spread the sublime teachings of his gurus, Srila Bhakti Raksak Sridhar Dev-Goswami and A.C. Bhaktivedanta Swami Prabhupada. Srila Govinda Maharaj  traveled ten times from India to the Seva Ashram in Santa Cruz, California. He came here to share his invaluable wisdom and realizations of the essence of bhakti-yoga; and he came to personally oversee our community’s spiritual practices.

A brief example of Srila Govinda Maharaj’s teachings regarding bhakti-yoga:

“The topmost position, and the actual need for our supreme transcendental benefit, is only bhakti-yoga. Without bhakti-yoga, other kinds of spiritual practice such as good works [karma-yoga] or the quest for liberation [jnana-yoga] cannot give us the proper result. So if we try to practice the nine kinds of devotional service [bhakti-yoga] under the guidance of a proper guru then we will easily receive the greatest result.

Everybody has some eagerness to know what Indian religion is. But actually religion is not for India and not for America; religion is for the jiva-soul. Jiva-souls have permanent existence which is thinking, feeling, and willing, and jiva-souls are eternal. They have the Religion of Service to Krishna, their Lord, and service to the Transcendental Plane. There we find all happiness, all ecstasy, all beauty, charm, and Divine Love. Whatever we want in this mundane world within our conditioned position-beyond that, in the Transcendental World, that Divine Love is always waiting for us, waiting to embrace us.

We are really all members of that transcendental service world, but by misfortune and misunderstanding we have been captured by illusory happiness in this mundane plane. But Krishna is very merciful and He has given us the chance to go to our own home through our Divine Masters. It is necessary to plant and cultivate what you have received from them and that is through sadhana (spiritual practice). If we follow their guide-lines by chanting the Holy Names of the Lord, reading the holy books, serving the real holy Vaisnavas (devotees of the Lord), living without making offenses, and maintaining our lives with their Prasadam (mercy), then we must return to our holy home. That is real sadhana…If we offer all our activity for the service to Krishna, then that is bhakti-yoga.”

To learn more about bhakti-yoga and Hare Krishna religion in America, please read the following articles on Seva Ashram Post:

These are the presiding deities in the temple, Sri Sri Guru Gauranga Gandharvika Giridhari. Our founder, His Divine Grace Srila B.S. Govinda Maharaj installed Their Lordships in 1996 for the spiritual benefit of everyone. 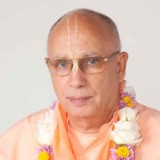 Srila Bhakti Pavan Janardan Maharaj is the acharya and spiritual leader of the Seva Ashram.

In his morning classes, Srila Janardan Maharaj reads from Sri Chaitanya Charitamrita, a holy scripture describing the pastimes and teachings of Lord Chaitanya and the essence of Gaudiya Vaishnava philosphy.

Come to the Sunday Feast 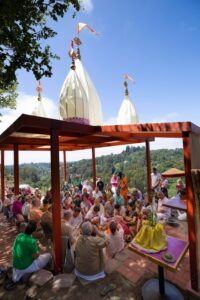 Guests are invited to the Sunday Feast from 11-2 every week. Experience congregational chanting, a lecture and a vegetarian feast. We try to offer activities for kids too!
Santa Cruz Seva Ashram
2900 N. Rodeo Gulch Rd.
Soquel, CA 95073
(831) 462-4712