The temple was packed with sweet devotees at our festival for Srila Gurudev’s Vyasapuja just the other day. Today we will observe another special festival in honor of the disappearance of Srila Bhaktisiddhanta Saraswati Thakur at 6 pm. Both the San Jose and Santa Cruz temples will start their programs at 6 pm. We hope to have your sweet association. Please bring your friends and family.

Below are all the special links posted on SCSMath.com for today. 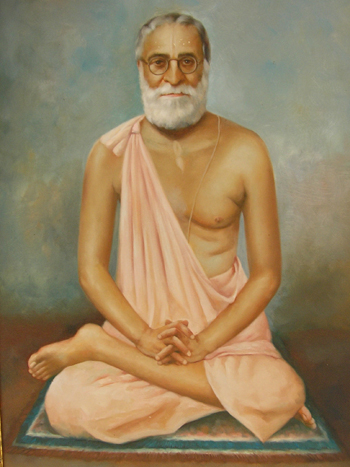 To Whom Shall I Convey My Joy? Srila Bhakti Siddhanta Saraswati Thakur expresses his joy and sorrow at completing his commentary on Sri Chaitanya-charitamrta. Srila Bhakti Raksak Sridhar Dev-Goswami Maharaj specially requested that this poem be recited on the disappearance day of Srila Saraswati Thakur. Posted on the Math’s GaudiyaDarshan.com website.

Audio: Srila Prabhupad Bhakti Siddhanta Saraswati Thakur’s disappearance day, 1983. Srila Bhakti Raksak Sridhar Dev-Goswami Maharaj speaks about the last moments of his Srila Guru Maharaj in this world.
“We were rendering duty in his sick bed, I was also among them, my duty was from 2 o’clock at night to 4 o’clock in the morning. Just before 24 hours of his departure he called for me and asked me to sing a song: Sri Rupa Manjari pada sei mora sampada, this famous song which is supposed to be the highest realisation of any Gaudiya Vaishnava devotee. Then after 24 hours, on the first of January early morning he left the world.”
Srila Bhakti Siddhanta Saraswati Thakur’s disappearance day, 4 January 1983:
11+ minutes, 2.7 MB mp3 audio

Audio: Srila Prabhupad Saraswati Thakur’s life was so exalted from his birth.
“Do what is in favour of service to the Lord Krishna, and all the illusion, bondage, disturbance, material mentality, everything will disappear.” Srila Govinda Maharaj, 23 December 2006.
(26 minutes, 3.4 MB mp3 audio also in higher quality: 6.3 MB.)

Audio: Disappearance Day of Srila Bhakti Siddhanta Saraswati Thakur: “We are all connected spiritually and materially with Srila Saraswati Thakur, and so fortunate that still we are continuing and carrying his conception all over the world by the grace of Srila Guru Maharaj.” Srila Govinda Maharaj, 8 December 2006.
(45 minutes, 5.7 MB mp3 audio also in higher quality: 11 MB.)