Please join us for the Divine Appearance celebration of Sachchidananda Srila Bhaktivinod Thakur in San Jose and Santa Cruz on Wednesday the 14th of September. Srila Bhaktivinod Thakur was the great founder of the modern Krishna Consciousness movement. He gave so many invaluable gifts to the people of this age, including literature and songs, the revelation of the holy appearance place of Sri Gaurangadev, and much more. We hope that you can join us in the evening beginning at 6 pm. 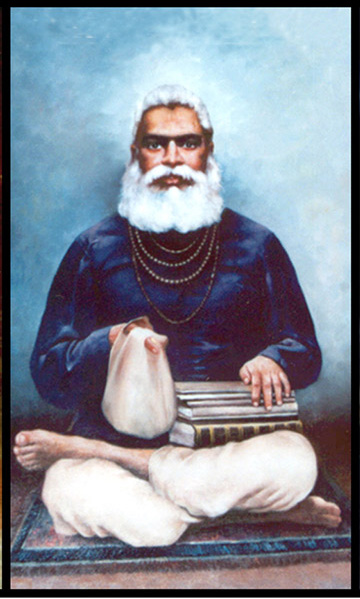 Srila Sachchidananda Bhaktivinoda Thakur, the nineteenth century pioneer of Krishna consciousness, was born in 1838 in Bengal. He worked tirelessly to preserve the spiritual tradition and literature of India….

Selected references to this day, on the Math’s websites:

The Bhagavata – Its Philosophy, Its Ethics and Its Theology as edited and published by Sripad B.S. Goswami Maharaj in 1985 in a truly beautiful format. 35 pages in full colour: 23.8 megabytes pdf file.

Slides with audio:Srila Sachchidananda Bhaktivinoda Thakur’s 165th Appearance Day Festival held at his Bhajan Kutir across the River Ganges in Godrumadwip. A large contingent from our Temple join a grand parikrama and assembly of Vaishnavas to honour this occasion. 19 September 2002, Nabadwip: 6+ minutes. 1.6 MB .mov QuickTime file.