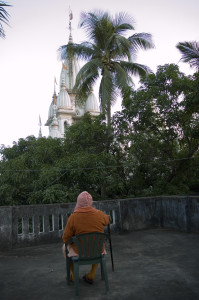 participate in the festivals, making it the busiest season of the year. It is always buzzing with so much Joy as everybody prepares to go on parikrama and celebrate the Advent of Sri Gauranga Mahaprabhu.

Around 2007 by Srila Gurudev’s mercy I was staying in Nabadwip and trying to help accommodate our Western devotees, that is to say helping with their transportation arrangements from Kolkata and their lodging. So it was my misfortune that during that time I forgot to make the arrangements for Sripad Yudhamanyu Prabhu who was arriving to Kolkata on a late flight from China. The next day before darshan when Srila Gurudev, Srila Bhakti Sundar Govinda Dev-Goswami Maharaj, learned I had forgotten He told me very seriously I could forget the world but never to forget Sripad Yudhamanyu Prabhu. And as it was his beautiful mood he reminded us of all the service Sripad Yudhamanyu Prabhu had done. It is no news to anybody how much affection Srila Gurudev had for Sripad Yudhamanyu Prabhu. But it is always good for us to have some remembrance of the beautiful service activities of the devotees. In another time as Srila Gurudev received the new Sri Bhagavad Gita, he started happily reading some slokas and their translations, and when he read “valiant Yudhamanyu” he smiled and re-read it with much affection. 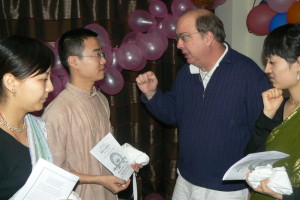 At present Sripad Yudhamanyu Prabhu is residing in China, where he was sent to serve by Srila Gurudev, and where he has been for ten years. Many Chinese devotees have come from his service and dedication. I heard Srila Gurudev say once in Venezuela how Srila Swami Maharaj had opened a tunnel in the western world and we have all come through that. I can’t help, even in my infinite ignorance, but feel that just like that all our Chinese godbrothers and sisters have come through Sripad Yudhamanyu Prabhu’s efforts. And this brought Srila Gurudev much happiness. But we can see that is a day to day labor of love to be there and to try to communicate “heart to heart” as Srila Gurudev would say, since Sripad Yudhamanyu Prabhu doesn’t really speak Chinese and many of our Chinese sincere seekers don’t speak much English. But still the mission goes on there, and by his tireless, valiant effort many souls have gotten shelter and affection, and others have gotten a connection and a chance to serve in this beautiful endeavor to satisfy our spiritual master.

So we asked Sripad Yudhamanyu Prabhu to tell us a little bit of his story. And in his humility he was very hesitant to do so. Still he told us a little bit and this we are presenting to you.

“In 1981 I started going over from ISKCON, the International Society for Krishna Conciousness, in Mayapur to the Sri Chaitanya Saraswat Math in Nabadwip. I used to go there with Srila Goswami Maharaj.  And this is how I started to make a connection with Srila Guru Maharaj, Srila Sridhar Maharaj.

At the time I was living in South Africa, so when I went back we started the temple there, a Sri Chaitanya Saraswat Math temple. We started distributing Sri Guru and His Grace and other books.  And Srila Guru Maharaj was very happy with that! When I went back to India he asked me if it would be alright if he gave me a title and I almost fell backwards! He said he wanted to give me the title “Seva Vikram” which means “one who is strong and courageous in service.”  And then he asked me to form a collecting party for the Nabadwip Math, and he used to call that party my personal party.

After Srila Guru Maharaj left this world Srila Govinda Maharaj asked me to come help Srila Janardan Maharaj restart the San Jose temple. This was around 1991.

At the beginning we started on a rental house on 17th street. But then when Srila Gurudev came on his first trip he asked me to visit him in his room after his afternoon rest “so I can beat you,” he said!  When I went up there he asked me to get a permanent place, a place that we could use for the San Jose and Santa Cruz devotees, not to rent but to own! And from that request the Soquel Ashram was manifested. And that was the year of 1993.

Then in the years that followed our Srila Gurudev installed the Deities in our Soquel Seva Ashram and arranged for Sri Mahaprabhu, Gauranga-Sundar, to be sent to the San Jose temple.

And in 2003 he sent me to China. I’ve been in China for the last 10 years coming back and forth. And in his will he asked Srimati Jivana didi and myself to take care of the Ashram in California until the day we die.”