Listen To Your Heart

Posted by Vaidehi Devi Dasi on Wednesday, May 9th, 2012 in Friends of the Ashram | Comments (0)

Recently, I was fortunate to attend the weekly program at our San Jose Ashram. The speaker this particular Saturday evening was our dear Godbrother Jairam Prabhu. I had not seen him give class before and was moved to hear his devotion revealed as he read and reiterated certain points from Srila Sridhar Maharaj’s book Sri Guru and His Grace. While he spoke, his wife Abha Didi helped in the kitchen to prepare the feast that would be offered to the Lord then served as prasadam. Outside, Jairam Prabhu’s 5-year-old daughter, Lavanika and his 4-year-old son, Nabh played with the other kids from the community who have now become their best friends. Although Jairam Prabhu and his family joined our community only a few years ago, they have already become pillars of the community while everyone feels as if Lavanika and Nabh were their own niece and nephew.

Jairam Prabhu and friends at the Seva Ashram

We all feel so charmed by this beautiful family that have become such an important part of our community so fast, that I wanted to understand more about the journey that lead them here to the beautiful feet of Srila Govinda Maharaj. Sitting on his couch while he told me about his and Abha Didi’s journey coming from India to the west, he shed light on two points. One: use your heart in your spiritual practice; do not let it become a mechanical thing. Two: do not wait until you are old and finished with “business” to practice spiritual life. The future is now and so much joy and happiness can come from your practice.

Jairam Prabhu was born and raised in Delhi, India. He grew up in Brahman family who worshiped Lord Ram. He explained, “My family members were Ram worshipers. We were very diligent about honoring all the practices but it was very mechanical. No one asked why we do this.” He explained that in India, groups were segregated based on whom they worshiped. Jairam Prabhu explained that although his whole family worshiped Lord Ram, his grandmother worshiped Sri Krishna. He had a special affection for his grandmother and therefore was fond of the books she read, including The Bhagavad Gita As It Is by Srila Bhaktivedanta Swami Prabhupada. Because it came from his grandmother, he would always remember the pictures and stories from Lord Krishna’s pastimes with much affection.

Later in his life, even though he was content in his job in Delhi, he knew that many people in India wanted to move the United States but he had no such desire. He was happy with his job and his family in India. However, providence had a different plan for him. One day at work, his boss told him about a position opening up in the States that he wanted Jairam Prabhu to manage. Within a few months, Jairam Prabhu and his wife Abha Didi were living in San Jose, California.

Jairam Prabhu explained that in India, his family’s worship to Lord Ram was very meticulous. And so I asked him if he was searching for a spiritual community when he came to the States to continue that practice. He answered, “No. I thought right now I will just take care of “business”; family, job, etc. Later I will learn more and search for spiritual knowledge. I was fine. We had our worship at our home. No problem.” 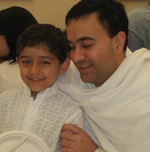 Jairam Prabhu and his Son Nabh

Abha Didi and Jairam Prabhu began attending the weekly programs at a temple in San Jose. He was following the spiritual practices very diligently, waking up at 3am to chant on his Japabeads. After some time he said “Then I started to become hungry for more. I am not someone who wants to bow my head at anyone’s feet but I became hungry for a teacher.” Thus began his search for a Guru. Jairam explained that in India, there are so many false Guru’s that many people give up the search for a teacher and maintain their worship on their own. But as he experienced, if you want to make progress on the path of devotional life, like anything else, you need a qualified teacher.

For his daughter’s birthday, Jairam Prabhu asked Lavanika what she wanted. She expressed she wanted to honor the vaisnavas with a Nam Hatta; a program hosted by a member of the community where they invite the devotees to their home for kirtan, lecture, and prashadam. His heart was touched by his daughter’s desire to hear and associate with the devotees at such a young age. Many devotees came to that program, headed by Srila Janardan Maharaj. Sitting in his living room crowded with people who love his family like their own, I thought what a beautiful life his children will have.

Jairam Prabhu’s sincerity led him to a real teacher. He said over and over, “it’s about heart, use your heart!” His message to everyone is to use your heart in your search for the truth. Don’t let it become a mechanical thing. And most importantly, don’t wait to pursue your spiritual life. As Srila Sridhar Maharaj says in His book Search For Sri Krishna, Reality The Beautiful,“Oh sons of nectar, you were born to taste nectar. You must not be satisfied with anything but nectar. Awake! Arise to your true nature.”