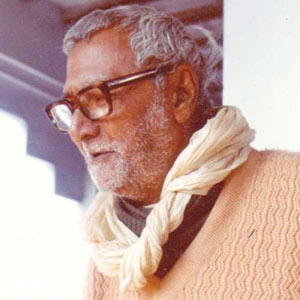 Please join us Thursday, July 19th at six in the evening in Santa Cruz to honor Srila Sridhar Maharaj on the holy occasion of his Divine Disappearance Day by hearing from Srila Bhakti Pavan Janardan Maharaj. The program in San Jose will begin at 5:30 pm.

I eternally offer my humble obeisances unto the lotus feet of my Most Worshipful Divine Master, the Supreme Emperor of the Sannyasi Kings: Srila Bhakti Raksak Sridhar Swami. (1)

He possesses a lofty, dignified, divinely effulgent, incomparable holy form, so charming to behold. Adorned with Gopichandan and a necklace of Tulasi beads, he holds the triple staff of the Vaisnava ascetics. (2)

Although he possesses the qualification of inconceivable potency, he is full of the utmost affection. All the ten directions are illuminated by the effulgence of his supramundane unalloyed perception. He is the dispenser of the genuine proper harmonious adjustment of all the Scriptures — the Vedas, the Vedanta, the Upanishads, the Puranas, etc. headed by the Srimad-Bhagavata-Purana (Srimad Bhagavatam) which holds equal importance with the Vedas. (3)

In the necklace of the jewels of the Acharyyas in the Sri Gaudiya Sampradaya he shines resplendently like the brilliant Kaustubha gem, and he is radiant in his glory as the Crown-jewel of the bumblebee-devotees who are mad in the Supreme Lord Sri Chaitanya Mahaprabhu’s love supreme. I eternally offer my obeisances unto him, my Most Worshipable Divine Master. (4)

By his grace, he brought to full bloom the deepest underlying purport of Gayatri, the Mother of the Vedas; by his grace he opened the hidden treasure-house of the glorious internal purport of Srimad Bhagavad-gita — and he distributed these gifts to one and all, even the lowest of the low. He revealed the supreme holy book (Sri Prapanna-jivanamrtam, which is a treasure of many types of precious gems of holy stanzas (the wealth of holy stanzas compiled from Stotra-ratna by Sri Yamunacharya and many other valuable sources) sung by the Lord and His devotees. He revealed an unprecedented collection of holy books (Search for Sri Krishna–Reality the Beautiful, Sri Guru and His Grace, The Golden Volcano of Divine Love, etc.) that are the very life nectar for the devotees’ hearts and spiritual senses — he gave these gifts to the world. I eternally offer my obeisances unto him, my Most Worshipful Divine Master, the beautiful Deity of mercy incarnate. (5-6)

He revels in his full-blown splendour as along with and through his intimate servitors he distributes in the entire universe the Supreme Personality of Godhead Sri Gaura-Krishna, the moon risen from the nectar ocean of the Grand Dance of the congregational chanting of Sri Krishna’s Holy Name. (7)

In Sri Nabadwip Dham, which is non-differet from the holy abode of Sri Vrndavan, His Divine Grace established the world-renowned Sri Chaitanya Saraswat Math at Sri Koladwip, the selfsame ‘Hidden Govardhan Hill’ (Gupta-Govardhan), which is the sacred place where all offenses are absolved (Aparadha-bhanjana-pat). (8)

There, he revealed the beautiful devotional service of the Worshipful Deities of Sri Sri Guru-Gauranga-Gandharva-Govindasundar, divinely manifesting his very self as the Deity of service in perfection. (9)

Eternally do I offer my obeisances unto the holy lotus feet of my Divine Master Srila Bhakti Raksak Sridhar Dev-Goswami Maharaj who carries the divine current of Srila Bhakti Siddhanta Saraswati coming in the line of Sri Rupa, the object of Sri Gauranga Mahaprabhu’s divine affection. (10)

One who with pure faith happily sings this Pranati-dasakam every day, gains the qualification to serve the Supreme Lord on the path of spontaneous love (Raga-marga), by the grace of the associate-servitors of that Srila Gurudeva.