Posted by Hasyapriya Das on Tuesday, September 5th, 2017 in Nabadwip

I would also like to take this opportunity to offer my respects to all the devotees who over the many years since Srila Govinda Maharaj’s departure, have tried and continue to try to assist Srila Acharya Maharaj in his service to our Sri Chaitanya Saraswat Math.

Many sincere devotees from around the world have inquired about the current situation at our Math in Sri Nabadwip Dham. Srila Ashram Maharaj is in Kolkata now and I have spoken to him several times and under his guidance have prepared this brief report on the current situation. 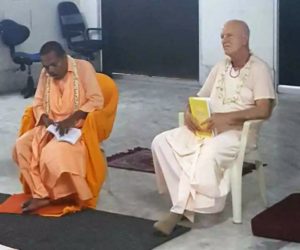 The opposition group broke the locks on the Centennial Hall and replaced them with their own locks. They closed the entrance gate to the Math and locked it so no one could enter or exit without their approval. Because of this situation, this year the Sri Janmastami celebration was not held.

Previously the Centennial Hall was where Srila Acharya Maharaj would conduct all the programs while the opposition group would conduct their programs in the Nath mandir. To provide some harmony at the Math, this compromise had been going on for many years. Now, the opposition group stated that there would no longer be two groups having separate programs at our Math. Instead they insisted that for now on, they would lead the programs and both groups should attend these functions under their direction. The police allowed these people to dictate these terms and refused to intervene.

After Srila Acharya Maharaj left Nabadwip, he received news that the opposition group had forced themselves into his quarters. We do not know what the condition of those facilities are at this time.

The local police are corrupt and have stood by and allowed this to happen in spite of Srila Acharya Maharaj presenting in the past numerous legal documents substantiating his position as the legal guardian to all the Math properties.

After reading the letter, the DM expressed his anger that the Nabadwip police were acting in this way. He said he would take some action. At the request of the DM, Srila Acharya Maharaj then sent the same letter to the chief of police of Nabadwip. Since then, the DM has been in communication with Srila Acharya Maharaj to see if the chief of police has taken any action, which he has not.

Corruption is rampant among the local police. However, there is some hope that the DM will stop the police from continuing to support the opposition.

The opposition group is now divided into two groups and they are fighting with each other. The first group is led by Ranjit, Nandan Swami (who’s brahmacari name at the time of Srila Sridhar Maharaj was Nimai Sundar) and Giri Maharaj (who’s brahmacari name was Gaur Krishna). The second group is led by Mahadev and Parmahamsa with devotees like Bipul, Vishvarup, Bhudev and Yadu Gopal. Srila Acharya Maharaj and Srila Ashram Maharaj recently met with some of the second opposition group at the office of Mr. Sawo in Kolkata. In the meeting, this second group complained bitterly against the first group and assured Srila Acharya Maharaj that from now on they will join him to fight against Ranjit & Nandan Swami.

In spite of everything that has happened, with the assistance of devotees all over the world, Srila Acharya Maharaj continues to financially support and maintain the facilities in Sri Nabadwip Dham and the other centers all over India. Srila Acharya Maharaj has repeatedly demonstrated his dedication to the service given to him by Srila Govinda Maharaj and in spite of so much trouble that has come to him, he is determined to never give up that service.

The method of making online donations through PayPal and credits cards are secure and functioning. Those funds are deposited into the Soquel Seva Ashram’s bank account and then sent to Srila Acharya Maharaj in a secure method.

Here is a link to the donation web site: http://scsmathinternational.com/donate.php
We are praying to Srila Govinda Maharaj that we may assist in some way although we feel helpless besides our offering of moral and financial support to Srila Acharya Maharaj.

I will try to write more as the situation develops and more news becomes available.