Please accept my affectionate obeisances. I’m just sending a reminder that there are two beautiful holy days next week.

These festivals are wonderful opportunities to honor our perfect divine masters. I pray you will be able to attend and enhance the mood of joyful devotion in our celebrations. 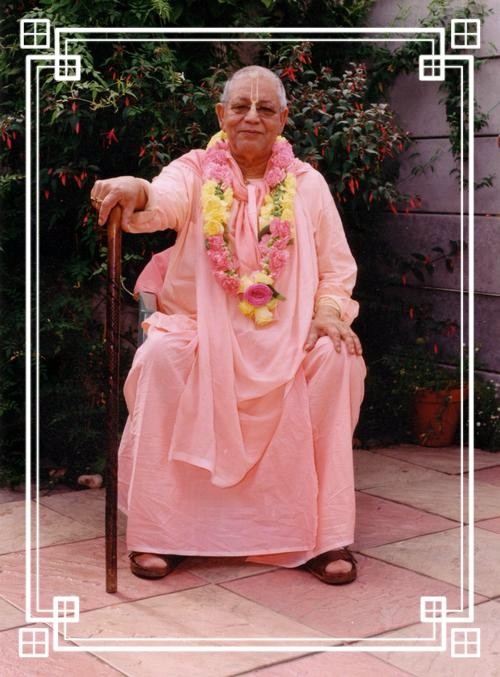 gurvabhista-supurakam
guru-ganair asisa-sambhusitam
chintyachintya-samasta-veda-nipunam
sri-rupa-panthanugam
govindabhidham ujjvalam
vara-tanum bhakty anvitam sundaram
vande visva-gurun cha
divya-bhagavat-premno hi bija-pradam
“I worship the holy lotus feet of he who perfectly fulfills the most cherished wish of his divine master — who is adorned resplendently with the blessings of his guru varga; who is adept in all Vedic conceptions, both conceivable and inconceivable; who is the faithful follower in the line of Sri Rupa; who is known as Srila Govinda Maharaj; whose beautiful divine figure revels in the mellows of divine love; who is the guru of the entire universe and the bestower of the seed of divine love for the Supreme Lord.”
tad viddhi pranipatena
pariprasnena sevaya
upadeksyanti te jnanam
jnaninas tattva-darsinah
“To understand transcendental knowledge, you must approach a self-realized soul, accept him as your spiritual master, and take initiation from him. Inquire submissively and render service unto him. Self-realized souls can impart knowledge unto you, for they have seen the truth…”

“Exclusive devotion must come from the disciple towards the guru. It is said in the Svetasvatara Upanisad

yasya deve para bhaktir
yatha deve tatha gurau
tasyaite kathita hy arthah
prakasante mahatmanah
“The key to success in spiritual life is unflinching devotion to both the spiritual master and Krsna. To those great souls who have full faith in both Krsna and the spiritual master, the inner meaning of the scriptures is fully revealed.” The guru is Krsna’s representative. We are in search of divinity, and so, we must try to concentrate all our energy wherever we find a real connection with divinity. That is the key to success, because Krsna is all-conscious. So, the response to our devotional efforts will come from Krsna according to our attentiveness to Him.”

Read all of Sri Guru and His Grace in a PDF…

Bound by Affection  An article by His Divine Grace, Srila Govinda Maharaj about his arrival at Sri Chaitanya Saraswat Math in 1947.

Audio: Sri Vyasa Puja, 1989. Srila Bhakti Sundar Govinda Dev-Goswami Maharaj is glorified by Sripad Janardan and Sripad Ashram Maharaj, then Srila Govinda Maharaj speaks to the devotees in English and in Bengali. “Now Guru Maharaj is not in form of human body in front of us, but I know that his divine direction is always guiding us… We shall try to maintain our devotional life with the service of Guru, Vaishnava, Bhagavan. This is my birthday and I am very happy that all the Vaishnavas are very merciful and blessful to me. I am giving my full dandavats to all the Vaishnavas, Gurudevas and well-wishers. They do not take my offences, I know. My prayer is that, until death, if i can serve the Deities, devotees and the Math I shall be very happy.”
Informal discourse by Srila Bhakti Sundar Govinda Dev-Goswami Maharaj, introduced by Sripad B.P. Janardan Maharaj and Sripad B.K. Ashram Maharaj. Nabadwip, 14 December 1989: 33 minutes, 7+ MB mp3 audio

Audio: Srila Govinda Maharaj speaking two days before his Sri Vyasa-Puja in 1999. “I am expecting so many devotees to come to my birthday festival and they will bring so many gifts to me, but what shall I give to them? … I think I can give some relief to them if they will follow me. … What is necessary to remove the obstacles in the path of devotion? Obstacle is asat-sanga, bad association. How much it can do wrong, we cannot conceive it.”
22 December 1999: 11+ minutes, 2 MB mp3 audio

(Download, or stream if you have the speed. View with VLC, Windows Media Player, etc. Mac users can also view with QuickTime Player after installing the free Flip4Mac.)

Srila Gurudev visits Sripat Bamunpara, the village of his holy appearance, and Nadanghat from where he came to Sri Chaitanya Saraswat Math in 1947. Much to the delight of the devotees His Divine Grace Srila Govinda Maharaj personally attended these festivities continuing the celebrations of Sri Vyasa-Puja. Five web-pages including pictures, synopsis of events and interviews with devotees about the significance of Bamunpara.

Talk by Pujyapada Satprasangananda Prabhu (later to become Sri Nayanananda Das Babaji Maharaj) in glorification of Srila Govinda Maharaj in Nabadwip in 1986.
“Our Govinda Maharaj is now the chief inspiration behind that [Srila Sridhar Maharaj’s] preaching … He was an expert in kirtan and playing the mrdanga; his kirtan was always ecstatic. From the time of his coming here to Sri Chaitanya Saraswat Math, the Transcendental Service of the Deities Sri Sri Guru Gauranga Gandharva Govindasundar became manifest more and more beautifully and gloriously. This gave us much joy. For this, Srila Sridhar Maharaj delegated all service responsibility of his Math, preaching and devotees to Govinda Maharaj…”

Vaishnava Thakur. Excerpt from Dignity of the Divine Servitor. Glorification of Srila Bhakti Sundar Govinda Maharaj from a lecture given by Sripad B.S. Goswami Maharaj on the Appearance Day of Srila Govinda Maharaj in San Mateo, California, 1990. (2.2 MB pdf file.)