On Sunday August 5th, Sri Sri Guru Gaurachandra made Their auspicious appearance at our Salt Lake City Sri Chaitanya Saraswat Mission. By His causeless mercy many devotees came from all around to participate in the beautiful festival. A large group of devotees came from the Sri Chaitanya Saraswat Seva Ashram in Soquel and San Jose, and all around the U.S.A, Canada and Mexico. 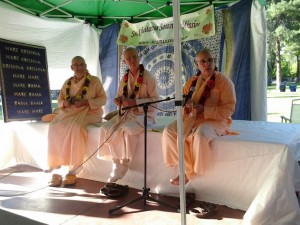 By Srila Acharya Maharaj’s arrangement, Srila Janardan Maharaj, Srila Ashram Maharaj and Sripad Parvat Maharaj presided over the installation and participated in many programs. Sripad Ramai Archana Niketan Prabhu was the presiding Pujari. He came for three days to participate in the festival, in one of the few times he has left the Soquel Seva Ashram.

All the devotees at our Salt Lake City Mission went out of their way to make each and every guest welcome. They extended to everybody the opportunity to have some Seva (service) and participate in this wonderful pastime of Sri Gaurachandra. This was such a beautiful quality of this festival. Everybody had some opportunity to participate, and everything went on in such a harmonious way. Indeed it seemed like we were serving at home.

Friday before the Inauguration day there was Harinam Sankirtan and prasadam distribution at a park by the Math. And Saturday all the devotees went on Harinam downtown by the main Mormon temple in the city, only to return to the temple to keep going with the preparations for the next day. In this way many garlands were strung and many preparations were made in the kitchen for Sunday. 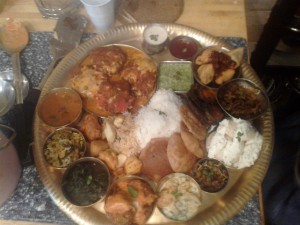 When the curtains were drawn and Sri Sri Guru Gaurachandra made His beautiful appearance everybody was ecstatic to participate in the Arotik. It was really an amazing sight to behold!

We have heard that Param Guru Maharaj, Srila Sridhar Maharaj, said: “When the Absolute is distributing Himself, He becomes Sri Chaitanyadev. And that Sri Chaitanyadev in the highest stage of His mercy is found here in Koladvipa… Without considering any crime, He absolved whoever He found. He accepted them all. After sannyas, when He returned to Bengal with the intention of going to Vrindavana, He showed His most generous and dignified temperament at that time. He recruited the sinners of the world. Anyone who came to Him received the highest mercy. This is the specialty of this place. By ‘place’ we should not think of a mere geographical location. Of course, it has such a location, but really this is where the Most Generous Absolute gave Himself to the worst sinners. Here, even the most fallen souls receive the grace of the Lord.”

By the mercy of our Guru Varga that same Mahaprabhu from Nabadwip has manifested Himself at our Sri Chaitanya Saraswat Mission. That same merciful spotless moon Gaurachandra appeared in Salt Lake City bringing joy to the hearts of all the devotees there.

“He has arms that extend to His knees, and His eyes are like the petals of a lotus. In His person are all the transcendental symptoms of the Supreme Personality of Godhead.”

And even though we don’t have the eyes to see Him, he can mercifully see us. If we see with the eyes of faith we can understand the auspiciousness of this event. Everything about it overflows with happiness- the devotees were so happy to make all the arrangements for His appearance, so they are all associating and meeting again with some service connections. And some responsible service is created with it.

The beauty of Sri Sri Guru Gaurachandra cannot be properly described, and the same goes for the hospitality and affectionate reception we had from our Salt Lake City family. But we can see clearly and happily how the flag of the Sri Chaitanya Saraswat Math shines resplendently there and all over the world to give shelter to those who need it.

I pray that the readers will forgive any offenses i commit in my attempt to glorify this beautiful festival.